Special winter hikes in the Sarntal

Crunching through the snow

A dream in white: sometimes steep, sometimes easy, sometimes wooded paths, always wrapped in white cotton. You can trudge through the landscape of the Sarentino Valley, observe ice crystals and interpret the most beautiful animal tracks during winter hiking. Alternatively, snowshoe comfortably from hut to hut to recharge your batteries and to feast traditional “Strauben" or conquer the mountains with touring skis. After, the downhill is well earned! 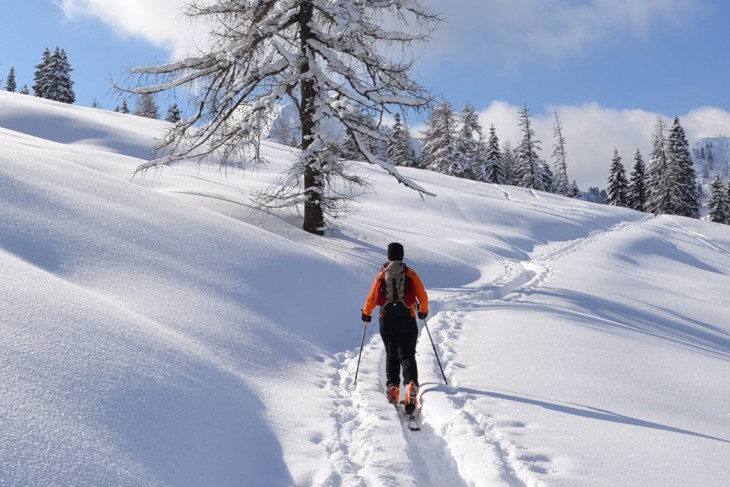 Difficulty: difficult
Ascent: from the Lake Valdurna follow the road which leads to the Val Grande (Grossalmtal) on the left bank. At the end of the lake, near a bridge, go left up some meadows in a straight line until the road opposite the Öbersthof.
Cross it and go up diagonally right along a small road, which takes you to an alpine hut; continue further up, going past mountain farms, to reach a barn at the edge of the wood. Through a hollow, partially covered in pine trees, to the left of the south-western side of the Punta Valcenai (Foltschenaispitze), go up a steep slope heading for the Tellerjoch to the left of the Cima S. Giacomo. Once you reach the mountain pass you have two possible routes;
a) in safe snow conditions, you can descend briefly from the pass to the other side and then up the steep south-eastern side of the mountain to reach the summit;
b) before the mountain pass, you can leave our skis and turn left along a ridge as far as the fore summit; then, through a passageway, we reach the main summit.
Descent: via the same route; in safe snow conditions you can descend to the Val Sebia (Seebachtal) along the steep north-west side of the mountain, going back to Lake Valdurna.

Starting at the Reinswald cable car valley station, the prepared winter hiking trail first leads along the ski slope up to the Sunnolm mountain restaurant. After a short, steep ascent from the Sunnolm, winter hikers can then look forward to continuing on a well-appointed, natural forest trail which winds its way uphill until just before the Pichlbergalm Alpine farm (cable car mountain station). From the Pichlbergalm head east to the sunny Latschensteig trail (part of the Urlesteig trail – the nature experience in the Sarntal valley) at the foot of the Blankenhörndl mountain. Continue until you reach the Getrumalm Alpine farm. At the Getrumalm a wide forest road leads down to the car park at the Reinswald ski area valley station.

In order to give you a better service this website uses cookies. By continuing to browse the site you are agreeing to our use of cookies. I agree